by King Sporty & The Ex Tras 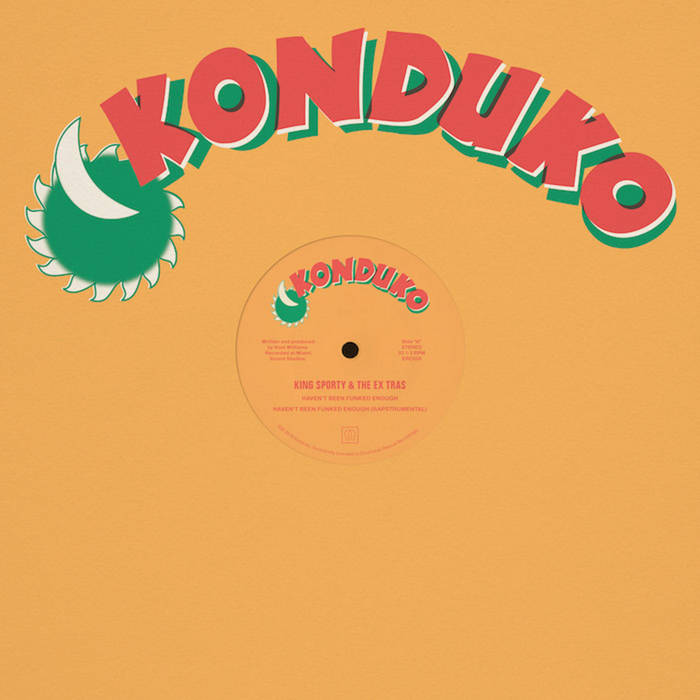 After last year’s reissues of the Miami based label, Dancefloor, Emotional Rescue returns to the City’s music with a look at the affiliated Konduko Records, with a collection of reissues from the acclaimed King Sporty.

A Caribbean musician who found his way to Florida, Noel Williams enjoyed a three-decade career that took in dub, funk, soul and disco that included a number of club hits along the way. To start the series is some of his better-known 80’s output, primarily around his in-house project The Ex Tras and three 1982 releases – beginning with the first official reissue of one of his greatest “hits” in Haven’t Been Funked Enough.

Initially known as a Jamaican born reggae artist, Williams gained his early tutelage at the legendary Clement Dodd’s Studio One, first as studio assistant before making his recording debut as a Deejay in the late 60s. Making the short move north to Miami by the early 70s, he set up first Konduko and later Tashamba Records to release his own music and productions, as well as those of artists he signed and developed.

As the decade progressed King Sporty and his roster’s releases developed from soulful reggae singles to the disco tinged sound found on his own, now sought after, Deep Reggae Roots album. The move to a more club based sound continued as disco took hold, with subsequent albums Keep On Burning and Meet Me At The Disco tapping in to the nascent sound with some success and recognition.

Working closely with Henry Stone’s TK Disco, Konduko moved in to the 80s with electro and hip-hop increasingly employed as part of Williams’ expanding fusion. With vocalists Connie Case and Johnny Griffin on board, a band – The Ex Tras – was formed around Williams dub tinged production.

From the warped electro-dub intro, heavy bass, chopped guitar, a watertight rhythm and driving percussion, Haven’t Been Funked Enough mixes many of Williams’ traits with an incessant vocals repeated infinitum. Backed with the original – here remastered for heavy rotation – is the never before released Rapstrumental. A merging of the Instrumental found on the flip of the US pressed Konduko 12”, with the Rap vocal version found on the UK import TMT release, this ‘remix’ offers an updated take on what has been the more discerning DJ’s play.

This is followed by a very special version from the Idjut Boys’ Dan Tyler, here in “Nad” moniker mode. After his much heralded remix, alongside Nick The Record, of Carl & Carol Jacob’s Robot Jam for the label (ERC022), who to reinterpret such a classic quickly fell on this perfect fit and his long form ‘Discomix’ offered here is the ultimate rerub. Taking all the versions deep to his mixing well, Tyler’s dub heavy reversion twists, turns, fuses, dissembles and reassembles in a reverb(erating) 10 minutes of electro-funk manner of heaven. As Mr Griffin says, “Lets unite, come on, let’s live!”